I wrote about how I don‘t keep New Year’s resolutions and so don’t make any. This year I’m trying something slightly different. I’m setting goals within a shorter amount of time, six weeks to be precise. The idea is that it will make things more achievable. I talked about SMART (Specific, Measurable, Achievable, Realistic, Timely) goals. My goal was to:
Run 5km, averaging 5.15 minutes a kilometre.
Click here to read the full post.

Since setting the goal…

I’ll be upfront and honest and admit that I wasn’t very consistent with doing everything that I’d set out to do. For example, during week two and three I wasn’t feeling well so managed one set of strength exercises.

I also found that at the beginning it felt like I had loads of time to complete everything in but as the deadline loomed closer there was a sense of urgency and feeling I had left things too late – a feeling I had experienced before. This sense of urgency reminded me of exams taken in the past, where at the start of the course felt like I had loads of time to complete the work in and towards the end felt like there was not enough time in the day to complete all the work. I guess most people have had that feeling of cramming the night before an exam.

What I’ve learned from this experience is that it’s better to do something small every day or every other day, that leads towards the bigger goal. Even though it doesn’t feel much at the time, all the small things add up to the bigger things. This means the goal is easier to be achieved.

When I ran the 5km at the end of the six weeks, I didn’t think that I would have improved that much. If you look below, I wrote down each time that I had completed a run or strength exercises. I was fairly consistent with the strength exercises, did a few hill runs, but very minimal normal runs. Having not run very much in total over the last six weeks, I thought this would then impact on my average time.

So I know you’re dying to know how I did and yes, I’m very pleased to be able to say that I managed to achieve my goal and run 5kms within my target time and pace of 5.15min/km. In fact, I even managed to go faster than I set out to be and ran a pace of… 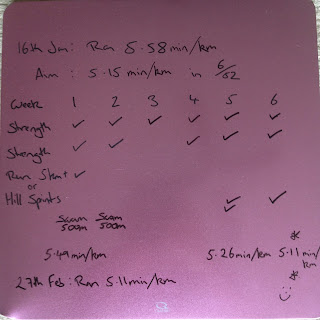 From attending a running lecture last year, I know that strength is as important when running as running technique is. My own experience these past six weeks supports this point. I’ve done strength exercises and minimal running, yet have still managed to improve my running time. It’ll remain to be seen if I continue with this improved time!

For the future, I’m going to have the strength exercises and running ticking away in the background. I’d like to maintain the speed I’ve got for now and maybe in the future, I’ll set myself another running challenge – whether that’s to increase my speed further or whether that’s to try something I’ve not done before like a half marathon..we’ll see.

Good question. I’ll be setting my next challenge and sharing it on here with you, so watch this space…

You can unsubscribe at any time by clicking the link in the footer of our emails. We have information about our privacy practices on our website.

We use Mailchimp as our marketing platform. By clicking below to subscribe, you acknowledge that your information will be transferred to Mailchimp for processing. Learn more about Mailchimp’s privacy practices here.